Maria Assunta Karini directs "Dreamsmellers", making her first feature film. Karini shows four Indian women, giving a hint to their lives suspended among dream and reality. That dream is sometimes very near and sometimes irrevocably distant.
Amrita, Purnima, Leila and Samira have one thing in common: "Animula." It is a young woman who will accompany them during this path. But not all of them recognize her, not all of them were able to preserve the unpredictability of this soul and the ability to go beyond that belongs to her.
Some of them have simply stopped.

Amrita is a manager, she runs an important office in the center of an Indian metropolis. Her life seems to have already been decided, and it was always easy to predict, since she was a child. Solid family, good education, a well regarded job. But then Amrita understands that life is also something else, it is a game, it is unpredictability, it is also a dream. And perhaps including all this in the reality we may live better ...

Purnima picks the cotton, she has always done that, just as her mother and her grandmother, and all the women in her family. And all those in her village, which means all the women Purnima knows. The world outside of her village doesn't exist, and she simply repeats the life patterns around her, not being able to imagine anything else. One day she sees her mother returning from the fields: she looks different, and for a moment it seems that everything can change. Just for a moment. But the vortex of reality drags her to itself in a moment, and in that moment she sees her mother taking off a cotton flower caught in the folds of her sari, and she realizes: her mother is the cotton bride, and this will be her life too.

Leila is an actress, she enjoys the work she does: it was her choice. It wasn't easy, and her family wasn't happy about it. Leila knows that there is always a price to pay for the non shared choices, especially if they aren't shared by those we love. The loneliness is impending, pressing and aggressive. And she is chewing her dreams that suddenly take on a bitter taste, or are unable to swallow. So the ice cream seems mud, it seems earth. But this isn't the only non shared choice: Leila doesn't find herself in the cliche of the actress in classic Indian films, and she imagines herself modern, free. Where will this desire for modernity and experimentation take her? Leila will realize it very soon.

Samira is a cement carrier, working on construction sites. Her dream as a child was to become a dancer. The dance was her world, but her path has already been decided by others: at the age of 13 she becomes a bride, and then mother, young and inexperienced. She learned quickly that there is no time and space for superfluous questions.
Samira is not sure that her voice is being heard. Do you hear her? Can you hear her? She screams from the scaffold.

THE VERY BEGINNING OF "DREAMSMELLERS"

Maria Assunta Karini, after a long series of short films, highly appreciated and often awarded in international film festivals (Seattle, Uppsala, Cannes, Seoul etc), chose to make her first feature film inspired by the world of women. The idea of the film is born from an encounter with Alena Jurisa, at her first experience as a screenwriter. The desire to understand the differences and similarities of the world of women in various cultural and social contexts led them to India, in Uttar Pradesh, destination chosen also thanks to the studies and in-depth examinations about Indian society and culture made by Alena Jurisa previously.

The complexity of Indian society constituted an excellent basis for the creativity of Karini and Jurisa, who wanted to develop it including also precise cultural references,  aiming however to universal themes such as loneliness, choice, security, the dream. Issues that the four women in the film are dealing with in their own way, sometimes trying to escape the fate and sometimes using it in their favour, or perhaps accepting it without a second thought.

The work on the script has been developed on different levels, altering both the time and the sense, doing also a "game of the grafts" that takes us up to Japan.
The lives of four women are not chronicled, but only hinted at; there is a central issue for each one of them: the one to fight for or to fight against - but sometimes this issue is only recognized as such and accepted.

The manager recognizes in her safety the beauty of the frailty; in fact, as a young girl, when walking down the road she sees the cloud, her first realization happens: her dream is real. As an adult she will have a similar experience in an improbable cotton field, where she will understand at the end, pricking herself in the act of picking cotton that that dream is real. She touched that hard and troubled world, previously invisible to her.
The cotton picker doesn't know what it means to dream, to imagine another reality, yet she had lived a hint of it for a short while.
The actress has tasted the loneliness, and she's getting through it with awareness.
The cement carrier could not choose, someone has chosen for her. Like many other women, she only lived the choices made by others.

The four women exchange also their roles in imagination, something almost impossible in Indian society. This mixing, this role reversal takes place at the level of  fantasy, but it allows us to see them differently, to imagine an exchange, a flexibility of parts that wants to be an invitation to break the invisible, but so deeply rooted barriers that separate people from different social strata, from different cultural backgrounds.

The "game of the grafts" develops after a thorough research of Karini about Japanese movies and film directors of the period 1937-1960; in fact, out of this study is born the idea of inserting some frames into the Indian context of the film, as if these other women seek to add other bits of life; as if speaking through their images about Indian women, they would give continuity to their stories. In this new setting, the Japanese scenes gain, through the editing and the phrases recited in Japanese, a value different from the original one.

The "anima puer," instead, is represented by the girl who travels ideally, remaining however inside each of them, at times hidden and unrecognizable, at times strongly manifested.

The film was shot partly in Italy (Piacenza and province) and partly in Lucknow, capital of Uttar Pradesh State in northern India.
Lucknow today is a large city that counts more than 1.600 000 inhabitants. The contrast between the poor areas and those where the wealthy, the rich, live, is very strong, although we can often observe a surprising proximity of elegant homes, neat gardens, automatic gates, and improvised hutches, made of wooden boards and covered with plastic sheeting.


One of the locations for the shooting was in the outskirts of this city, in the village of Kakori. It is a beautiful building that is now being used partly as a school:

"The village is a heap of low and square houses, small constructions mixed together along a dirt road, flanked on both sides by a malodorous canal.
The house is delimited by walls, and it includes several buildings, some inhabited and some not, and two large green areas. It emanates a sense of tranquility and peace. It may be because of the colors, the blue and orange of the plaster bricks, or because of the space, ample and well distributed, but suddenly one feels  protected from the disruptive life of the village. "

From: "Indian Diaries,"  by Alena Jurisa


The other location of the film were in Italy, in Piacenza and in its province. Some scenes  were filmed in a 17 th  century cellar. It was chosen for the size and structure of the vaulted rooms; in fact ,two scenes were shot in a rectangular room where we’ve ricreated a black ground field.
The other scene was shot in a very small room,generating a sort of a sacred place,a cell,an altar.
In these spaces we have tried to create unlikely situations,outside of time. 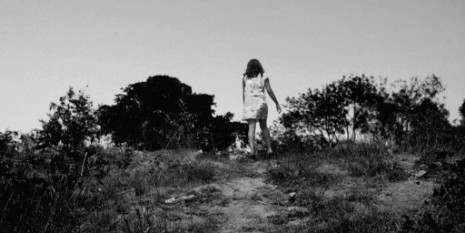